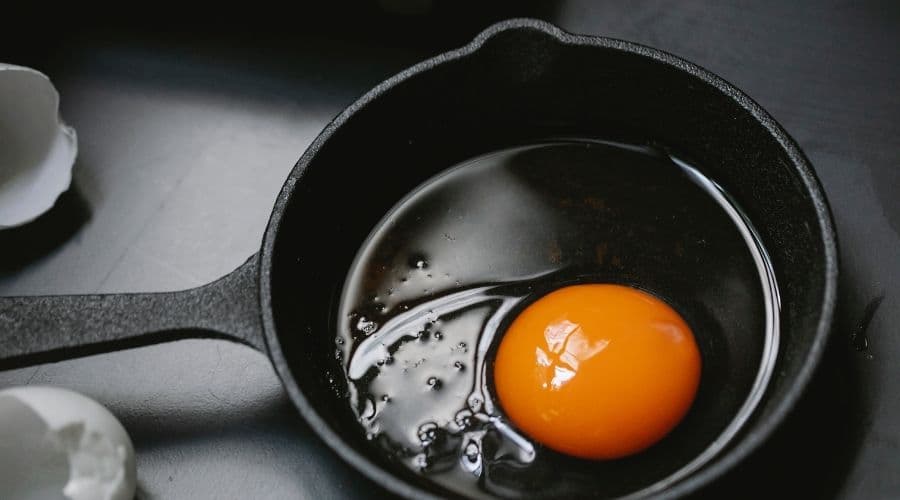 Cast iron is one of the most versatile cookware materials available and can work on any type of stovetop, including induction.

How Does Induction Cooking Work?

Tips to use Cast iron on Induction safely and effectively

As I already mentioned that technically cast iron is compatible with induction cooktops, but there are a few other things you should consider for safe and efficient cooking.

1. Use a flat-bottomed vessel: Ensure that the bottom of your cast iron skillet or pot is perfectly flat to ensure maximum contact with the heating surface. When using a cast iron skillet, it’s best to choose one with a concave bottom.

2. Preheat your pan or pot: Cast iron heats up quickly, so preheating is essential in order to ensure even cooking temperatures throughout the entire vessel. Once your cooktop has reached its desired temperature, place the pan on top and allow it to heat up for a few minutes before adding your food.

3. Be mindful of temperature: Cast iron conducts and retains heat very well, so when you’re cooking with it on an induction cooktop, be sure to keep the temperature levels low to prevent burning or sticking. This is especially important if you’re using a cast iron skillet, as it can easily become overheated.

4. Be careful when lifting: When lifting a heavy cast iron pot or skillet, be sure to lift it gently to prevent any damage to the cooktop. Hot cast iron can also be quite slippery, so you’ll want to use oven mitts or a thick kitchen towel when handling it.

5. Don’t Drag it: When moving your cast iron cookware, never drag it across the surface of your induction cooktop as this can cause scratches and other damage.

Advantages And Disadvantages Of Induction Cooktops

An induction cooktop is a type of cooking surface that uses electromagnetic energy to produce heat.

This type of cooktop has a number of advantages over traditional gas or electric stovetops.

For one, induction cooktops are much more efficient than other types of cooking surfaces. They also operate very quietly, so they are a good choice for kitchens where noise needs to be kept to a minimum.

However, there are also some disadvantages to using an induction cooktop. One is that they can be more expensive than other types of cooking surfaces. They can also be difficult to use if you are not familiar with them. Lastly, they can be difficult to clean.

Cast iron is a great material for cookware because it heats evenly and retains heat well. However, there are some downsides to using cast iron on induction cooktops.

Cast iron is a popular cookware material due to its even heat distribution and durability. However, some people are unsure if it can be used on an induction stovetop. The answer is yes, cast iron can be used on induction stoves; however, there are a few things to keep in mind. Because cast iron pans retain heat for a long time, make sure to use a lower heat setting than what you would normally use for other cookware materials.

Can I use a cast iron skillet on an induction stove?

The quick answer is yes, you can use a cast iron skillet on an induction stove. Cast iron is a good heat conductor and the induction stove’s ceramic element will distribute heat evenly throughout the pan; however, there are a few things to keep in mind. Because cast iron pans retain heat for a long time, make sure to use a lower heat setting than what you would normally use for other cookware materials.

How do I clean a cast iron skillet?

Cast iron skillets can be a little tricky to clean, but it’s worth it because they are so durable and heat up evenly. First, remove any food particles with a stiff brush. You can then use a little dish soap and water to scrub the skillet, making sure to get into all the nooks and crannies. Finally, rinse the skillet well and dry it off.

How do I season my cast iron cookware?

Cast iron cookware is easy to season and maintain. First, wash the cookware with hot, soapy water and a stiff brush. Rinse and dry completely. Apply a light coating of vegetable shortening or cooking oil to all surfaces of the cookware. Place the cookware in a preheated oven at 500 degrees F (260 degrees C) for 1 hour. Turn off the oven and allow the cookware to cool in the oven.

How do I clean my cast iron skillet?

Chef and founder of KitchenRare.com, I'm a cooking enthusiast. I know everything there is to know about pans, pots, and grills, and I love sharing my knowledge with others. KitchenRare is the ultimate destination for cooking enthusiast like me, where you'll find everything from the latest innovations in cooking technology to classic cast-iron pots.