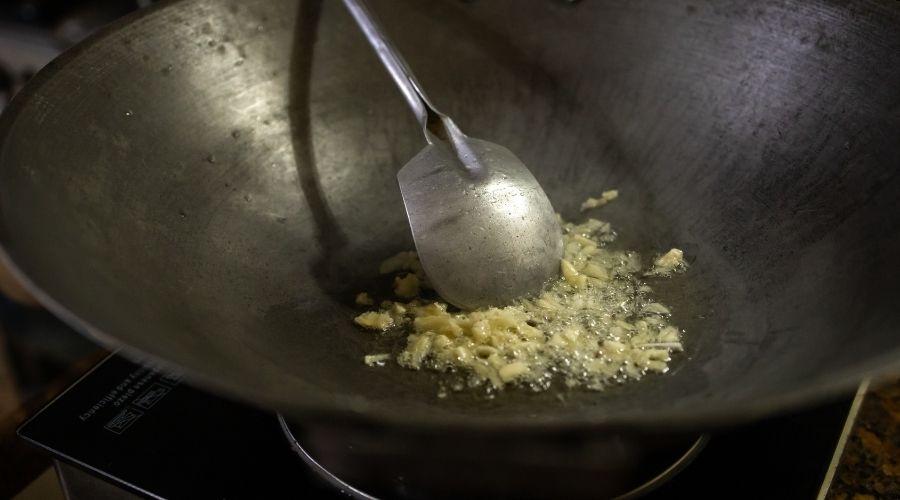 Can you use wok on the induction Stove? The answer is, it depends on the material and shape of the wok, but before going to know it is important to know what wok is and how an induction stove works.

The wok is a popular cooking vessel that is used in many Asian cuisines. It is used for stir-frying, braising, and steaming. It is believed that the wok was first used as a cooking tool in China. The wok has a round bottom and a long, curved handle.

What is Induction Cooking?

Will a WOK work on an Induction Cooktop?

In general, Woks are designed for use on gas stoves. However, there are a number of Woks on the market that are advertised as being induction-compatible. So the question is, will a Wok work on an induction cooktop?

The answer is yes – but with a few caveats.

First, the Wok must be made of magnetic materials, like stainless steel.

Second, the wok should have flat bottoms, so that it sits flat on the cooktop.

Woks that have a dome or a curved bottom are not induction compatible, and while some people might try to use a spherical base wok on an induction cooktop, this won’t work because the magnetic field created by the induction burner won’t be able to pass through the curved bottom of the wok.

Factors that decide the induction compatibility

There are a few things that really matter when it comes to using wok on an induction cooktop.

The first is the material of the wok. The wok must be made of ferromagnetic material, in order for the heat from the cooktop to transfer properly.

Cast iron, stainless steel and carbon steel are both compatible with induction cooking, while aluminum and copper are not this is because they are not ferromagnetic and will not work with an induction cooktop.

Another important thing is, you’ll need to make sure that your wok has a flat bottom so that it will sit properly on the cooktop.

Type Of Wok that works on Induction stove

There are several different types of woks available that works on induction stoves, including cast iron, carbon steel, and stainless steel. Each type of wok has its own unique benefits and drawbacks.

Benefits of a Wok

A wok is ideal for stir-frying because its shape allows food to be moved around quickly and easily. But a wok can be used for more than just stir-frying. It can also be used for braising, stewing, and deep-frying.

Here are some of the top benefits of wok cooking:

Cooking with a Wok on an induction cooktop is possible, but there are some things you need to know to make it work well. First, you need to get a Wok that is specifically made for induction cooking. Second, you need to use a magnetic stirrer or a wok ring to make sure the Wok is properly attached to the cooktop.

How do I clean my wok?

There are a few ways to clean a wok. One is to fill it with water and bring it to a boil, then let it cool. The water will loosen the food particles and you can just wipe it clean with a cloth. Another way is to sprinkle some baking soda in the wok and scrub it with a brush.

Why does my wok need to be seasoned?

Seasoning a wok is important because it helps to create a nonstick surface and prevents food from sticking. It also gives the wok a nice flavor. There are several ways to season a wok, but the most common way is to heat the wok up and then coat it with oil.

How many watts does an induction stove have?

The amount of watts an induction stove uses depends on the make and model. Some induction stoves use as little as 1200 watts, while others use up to 4000 watts.

What is the best size for a wok?

It has been said that the best size for a wok is 14 inches in diameter, but opinions vary on this. Some people believe that a larger wok is better because it allows for more space to cook food, while others think that a smaller wok is better because it is easier to control the heat. Ultimately, the best size for a wok depends on the cook’s preference and cooking style.

Can I use a traditional wok on an induction stove?

Chef and founder of KitchenRare.com, I'm a cooking enthusiast. I know everything there is to know about pans, pots, and grills, and I love sharing my knowledge with others. KitchenRare is the ultimate destination for cooking enthusiast like me, where you'll find everything from the latest innovations in cooking technology to classic cast-iron pots.